It was a great night at the Dogs NSW Bushfire Appeal Jumping trial. There were three rings running, nearly 750 entries, around 250 dogs running, and about 180 handlers.

Needless to say, walking the course was like rush hour in the city, and we had to stand back each time to wait for the crowd to dissipate before we could take a good look at the course.

Thanks to the wonderful Agility Club members at NSDTC, we had amazing food, great company and we even had a cheer squad.

Our first run was a great start to the night, and it was a great challenging run. Not too difficult, not too easy, a couple of curve-ball angles and lines through the course.  I was more nervous than I’d ever been, especially worried about Jason keeping attention on me. Before I new it the run was over, and unbelievably we had a clean run and a good time! That means a Qualification! I was so excited I jumped up and down – poor Jason couldn’t understand why I was so excited, and waited patiently for his treats. His patience was rewarded with a massive Jackpot and lots of hugs.

I didn’t think his concentration would hold out the entire night. So by 9:30pm we were running on fumes, and Jason was still OK on the energy levels. The second run was a nice long run, course time of 40s compared with 35s on the first course. Not very difficult, but tricky enough to throw you out if you weren’t careful. This run had two tunnels, and on the second tunnel, the dogs had to run through, accomplish 2 parallel jumps (no pull through), then back through the tunnel before the straight run home.

We started really well, and Jason was flying. Through the first tunnel, and heading down to the second, and our first fault.The second tunnel was right near our little camp, and for some reason (probably Jaxon’s need to be in charge of things), he ran past the tunnel entrance. Oops. He went in next turn, came out, executed the jumps beautifully, then missed the tunnel again. So when we got through, he was fine down the home straight. Unfortunately no quali, but we had a lot of fun on that course as it was speedy and really let us run!

After the second run, we had a long wait for our final run. We retired to the camp, and some rest….

By the time of our third run, it was well into the first hour of Saturday, and Jaxon got a rude awakening. With drooping eyes, I managed to convince him it would be worth the treats. I was so amazed at his stay on the lead out, I should have known something was up. Poor Jaxon…. he didn’t want to run, and started running the other way. I managed to coax him through 2 jumps, but when we got to the tyre, which was right next to the clubhouse, Jaxon wasn’t having a bar of it. He took a sniff at the tyre and headed straight into the clubhouse. Our run was over. 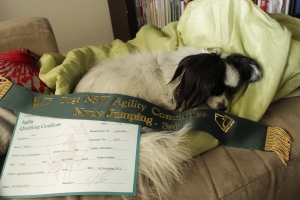 Jason enjoying the spoils of his first qualie

A huge thanks to those that stayed to cheer us on. We’re just sorry that we didn’t do you proud.

Congrats to all the other NSDTC team who got qualies, places and titles!

Hard to believe we got home at 2:30 this morning, but it was a great night.

An Aussie girl and her Border Collie take on the world

The escapades of our Chesapeake Bay Retrievers

Joy: From the Ground Up

City girl turned country woman writes about life on a ridge with her Golden Retrievers the "Sun Dogs" her horses, goats, and a wild burro named Rosie.

A single woman of a certain age maneuvers the rapids of life with the help of her companion animals.

Day in the life of an agility loving papillon

All things Cairn...Snapshots of my Cairn Terrier, Trev & Caring For Your Senior Dog

We Live In A Flat

Dog photo blog stories from our apartment in Singapore

No Dog About It Blog

It's all about dogs!

Day to day dilemmas of a dog living in the 1st world.

The Adventures of Sawyer